MY APPROACH to singing

​The way I lead singing assumes that “if you can talk you can sing” and that, much like many pastimes (think football, cooking, knitting) some people will choose to develop particular expertise but the vast majority of us just like having a go because, again like many pastimes, it’s fun and feels good to do.

An awful lot of people tell me variations of “Oh you won’t want me in your groups! I can’t sing. They kicked me out of the school choir because I’m completely tone deaf”.  Imagine if someone was telling you that about reading “Oh you won’t want me in your reading group.  I can’t read.  They told me I was incapable of reading when I was a small child and I’ve never tried since”.  You’d be outraged!  How dare they tell you you can’t read?  Of course you can read, it takes practice and patience and might be quite hard at first but if you want to read, of course you can read!

Well, I feel very much the same about singing but I wouldn't suggest you need much practice and patience - you just need to get singing.  It’s true that lots of people haven’t sung since childhood. It's true you might be quite nervous about doing it as you might be totally out of practice. It's true you might feel horribly self-conscious. And it’s my belief that the best way of really starting to enjoy singing is by doing it.

The wonderful Frankie Armstrong came to that belief long, long before I got there and founded, with others, the Natural Voice Practitioners Network of which I have been a member since it was formally founded. 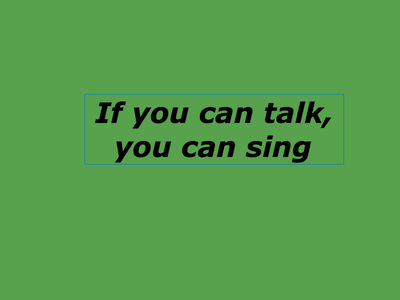 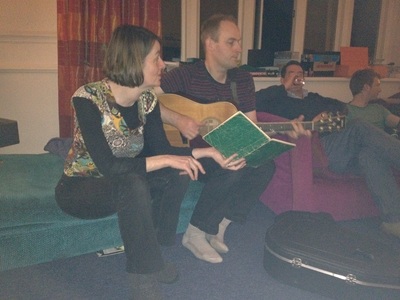 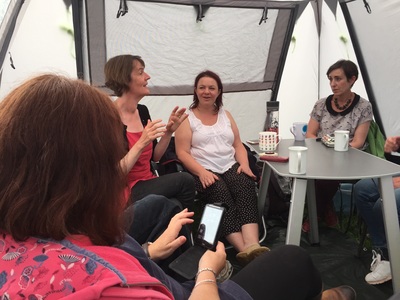 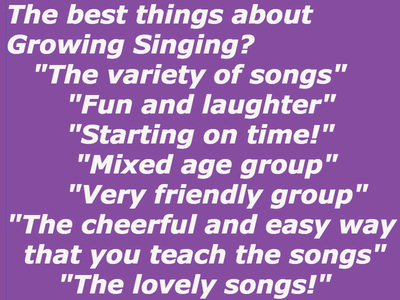 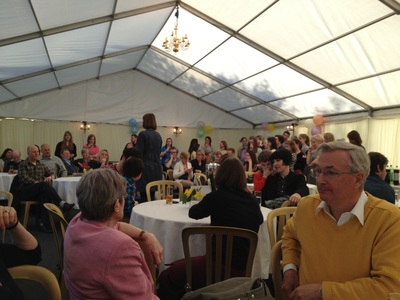 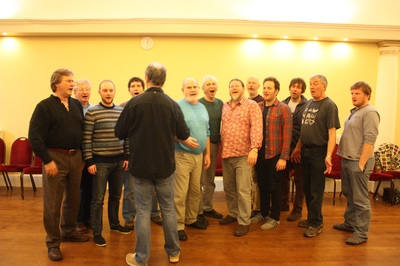 I guess I’ve pretty much always sung and never been discouraged, so I was lucky.  When we were all quite tiny (in a family of 7 children) my wonderful Mum and her friends started a church folk music group (much to the consternation of some other church goers I gather!) and we sang in old peoples’ homes and the like as well as singing at Sunday Mass and on long journeys in the car.

Most of us went to Avril Dankworth’s Music Camps regularly from the age of 8 ish and I still know my solo from The Little Drummer Boy from way back then.  I was so envious of my elder sister who got together with some excellent folk singers locally and toured a few ceilidhs singing three-part harmonies. And so it went on, I just sang whenever the opportunity came up and particularly loved singing with a bunch of others.

While living in Italy in the mid 1980s I met my beloved friend Louise Tenenbaum who, over the years, introduced me to her extraordinary family and to so many songs, ways of singing and groups that do it.  It was then I began collecting harmony songs that can be sung without instruments to accompany them and began to dream of running groups myself.

Back in London in the mid 1990s I did a training at Goldsmith’s College – a certificate in Music Workshop Skills – and started up a community choir in Hackney, The Wing-It Singers, that still runs today.  In the intervening years (as well as several non-singing-related careers) I ran a choir at the Deptford Albany, started and ran a charitable organisation offering music workshops to people experiencing homelessness, busked all over much of the UK in my lovely Romahome campervan, made an album of traditional songs and another of my own compositions, ran singing camps in the US with the Tenenbaum family, sang wherever I could and discovered Folk Camp.
​ 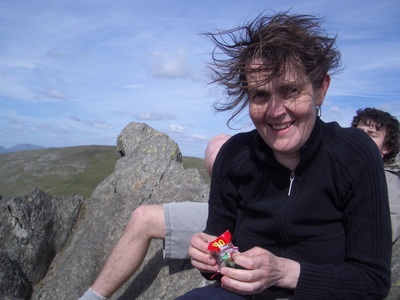 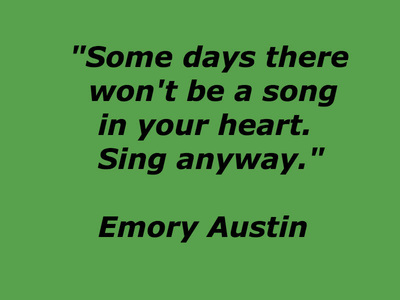 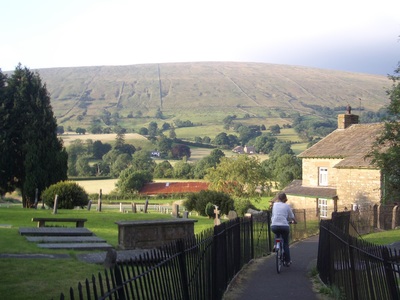 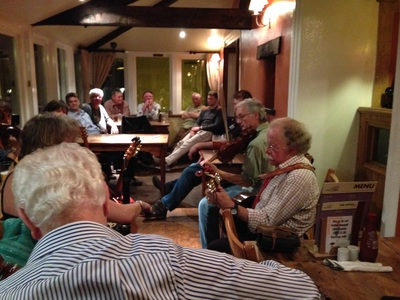 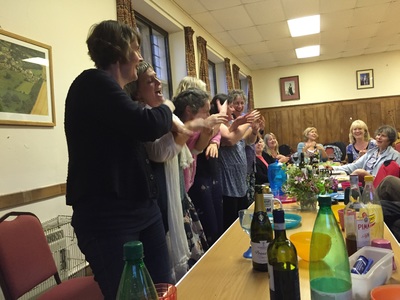 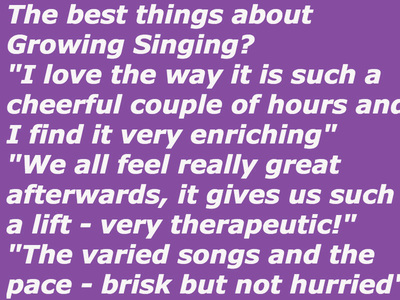 In the same years (life’s never really the bowl of wholly ripe and sweet cherries we’d love it to be) I experienced debilitating episodes of depression and anxiety and struggled immensely with my childlessness.  Let’s fast forward through some tricky bits to Kendal where I came to live in 2008 having fallen in love with my now husband via the Guardian's Soulmates internet dating site.

By then I’d collected 1000s of songs and run many groups so immediately started a group from home. I had also found an excellent job and was Administration Coordinator at Growing Well for 7 years where I learned so much about maintaining one’s own wellbeing in the midst of life’s ups and downs.

One of my mantras became “Slow down, lower your standards and, when in doubt, sing!”.  After years of extraordinarily helpful psychotherapy both in London and in Kendal and linking into a support group of other people who were also involuntarily childless – More to Life (the marvels of the internet, eh!) – I have settled into a place where depression and anxiety rarely figure and found myself wanting to share what I can of the intense enjoyment of singing with a bunch of others.

(I'm adding this note in 2018, since discovering Gateway Women by which I have been transformed somewhat! I'm still very much a struggling human being but - and I never thought I'd say this - am being transformed into a happily childless woman.  Really.  If this rings any bells for you then do go and have a look at Gateway Women - it might very well help.)

I now lead songs in as wide a variety of styles as I can including songs from around the world, from a variety of religious and non religious traditions, original and traditional, modern and ancient.  I do still perform (and love it!) with Pandora’s Handbag and sometimes at Songclub (first Tuesday of the month at Ruskins, Kendal) where you are also invited if you enjoy the performance element of really preparing a song to please an audience with. 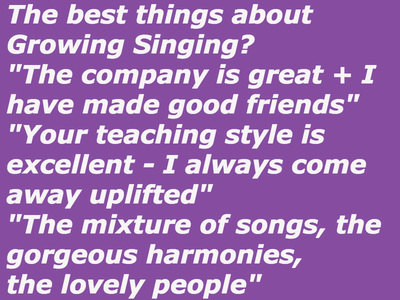 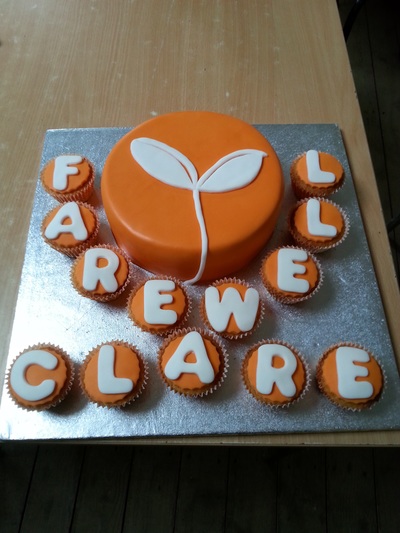 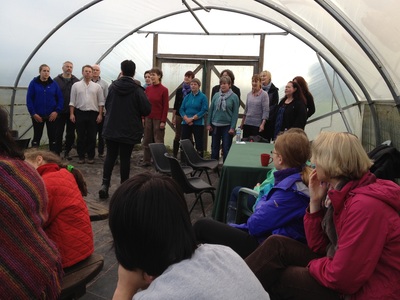 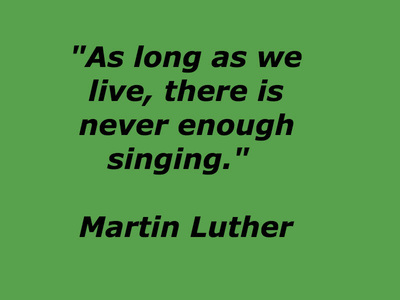 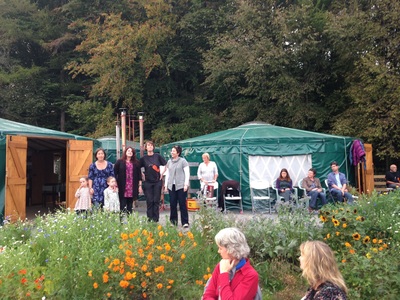 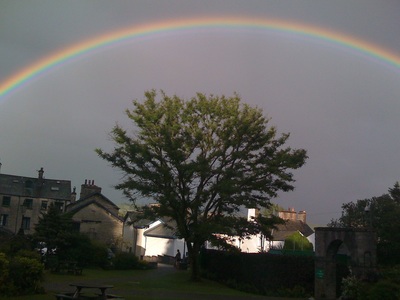 My approach to singing hasn’t really changed that much over life.  Singing doesn’t solve by any means all life's problems, but it can really help.  I love doing it, especially with others, and cannot describe the privilege of leading a roomful of others in a glorious singing moment.

The Growing Singing groups I now lead don’t often involve performing as I’ve come to believe that the really valuable bit for many people isn’t in the performance but in the challenge and satisfaction of learning a new song in several parts and just indulging in that special thrill of letting your voice be part of a greater harmonious whole.

Don’t take my word for it though – go and find an opportunity to sing!